March 28, 2013 (West Allis, Wis.) - Joining a growing list of all-star drivers competing in the Swiss Colony Howie Lettow Memorial 150 presented by RaceTeamGear.com event July 8-9 at The Milwaukee Mile is one of the most affable characters in all of NASCAR, accomplished racer and TV personality Kenny Wallace.

One year ago, his older brother Rusty Wallace came out of driving retirement to compete in the inaugural Howie Lettow 150 and will be listed as Kenny's car owner. This year, among the stellar field of expected driving talent Kenny will face includes uber-popular NASCAR champion driver and Wisconsin native Matt Kenseth.

"Rusty told me DO NOT take this race lightly because the best are there!" Kenny emphatically stated in a recent interview. "I studied Rusty's situation (last year) real close. My number one goal is to make the feature."

Growing up in St. Louis, Mo., Kenny said it was a big deal in the late 1970's as an impressionable teenager to come to Milwaukee to work on Rusty's crew and served as a rear tire changer.

This is a reminder that ticket sales will go on sale tomorrow February 22nd at 10:00am for the Howie Lettow Memorial 150 at the Milwaukee Mile on July 8th and 9th. Kicking off the event on Monday July 8th will be a performance by Heritage Southern Rock Band 38 Special. The concert event will only have 800 preferred seats and 5000 general admission available, so take this time toreserve your tickets now. The FIRST 20 people that purchase the "Preferred Seating Bundle" tickets on Friday will be awarded first and second row seats to accommodate all of your guests.

Please note: The event has seen a few changes that will see an earlier start time at 6:30pm with only one main event being run after that time. We expect to be fully completed prior to dark in order to get everyone home early. Preliminary events will begin at 3:30pm with a total of five divisions in action. Mark your calendars now to save some vacation to experience this great event. 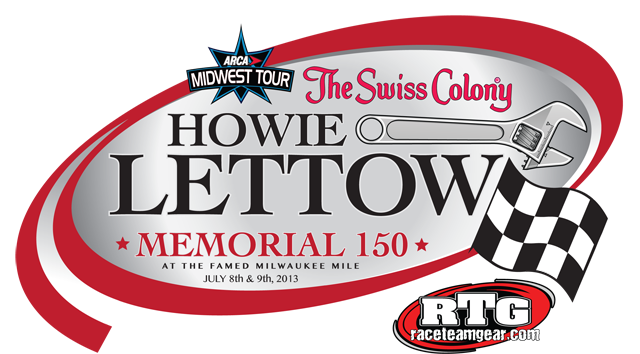 February 11, 2013 (West Allis, WI) – For American stock car racing fans, the Daytona 500 is the biggest event on their calendar. As the Great American Race is upon us, one event many Midwest short track racers considered “their 2012 Daytona 500” was held at the Milwaukee Mile last June.

This summer, the highly-anticipated event returns to the Milwaukee Mile and moves to the second Monday and Tuesday in July. Event organizers, building on the success of last year, are adding a Monday night concert featuring the heritage Southern rock band 38 Special.

With sales in excess of 20 million, 38 Special will headline “ARCA Fest” on Monday night, July 8th performing their arena-rock pop smashes “Hold On Loosely,” “Rockin’ Into the Night,” “Caught Up in You,” “Fantasy Girl,” “If I’d Been the One,” “Back Where You Belong,” “Second Chance,” and more.

The Midwest Tour, now under the sanction of the Automobile Racing Club of America (ARCA), will again be the headline division, with soon-to-be-announced NASCAR stars racing Tuesday night, July 9th against a deep field of the country’s best racers led by the ECHO and ECHO BearCat Touring Stars of the ARCA Midwest Tour presented by SCAG Power Equipment & Lester Buildings.

"There is no place like the Milwaukee Mile. It is a hard place to get right, and when you do, it's so rewarding."