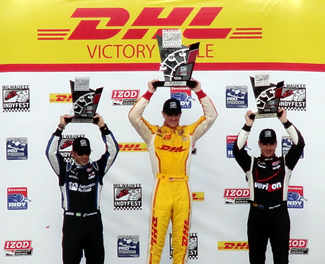 Ryan Hunter-Reay continued Andretti Autosport's domination at the Milwaukee Mile, winning the IndyCar event Saturday for the second year in a row.

Hunter-Reay became the first driver to win back-to-back races at the Mile since Tony Kanaan in 2006 and 2007 when he was driving for — you guessed it, Andretti.

Andretti drivers have won five of the last nine races at the mile oval.

It's the second win of the season for the defending IndyCar Series champion and it came at the site of the track he used to jumpstart last year's title run. Hunter-Reay reeled off three consecutive wins starting with Milwaukee last season to climb into the championship race.

"It's always good to go back to Milwaukee, a place that you really have to drive hard the car and be on your toes 100% of the time."